On Sunday 27th April 2014, I was honoured to receive the Achievement Award 2014 by Oshwal Association UK. Every year they select one individual who stands out in the community.

As I was only one of five nominated, my appreciation goes out to the runners up and all of those that have contributed to helping others but are yet to be acknowledged.  I learnt that I was nominated when I got a phone call to tell me I had been chosen as the winner. 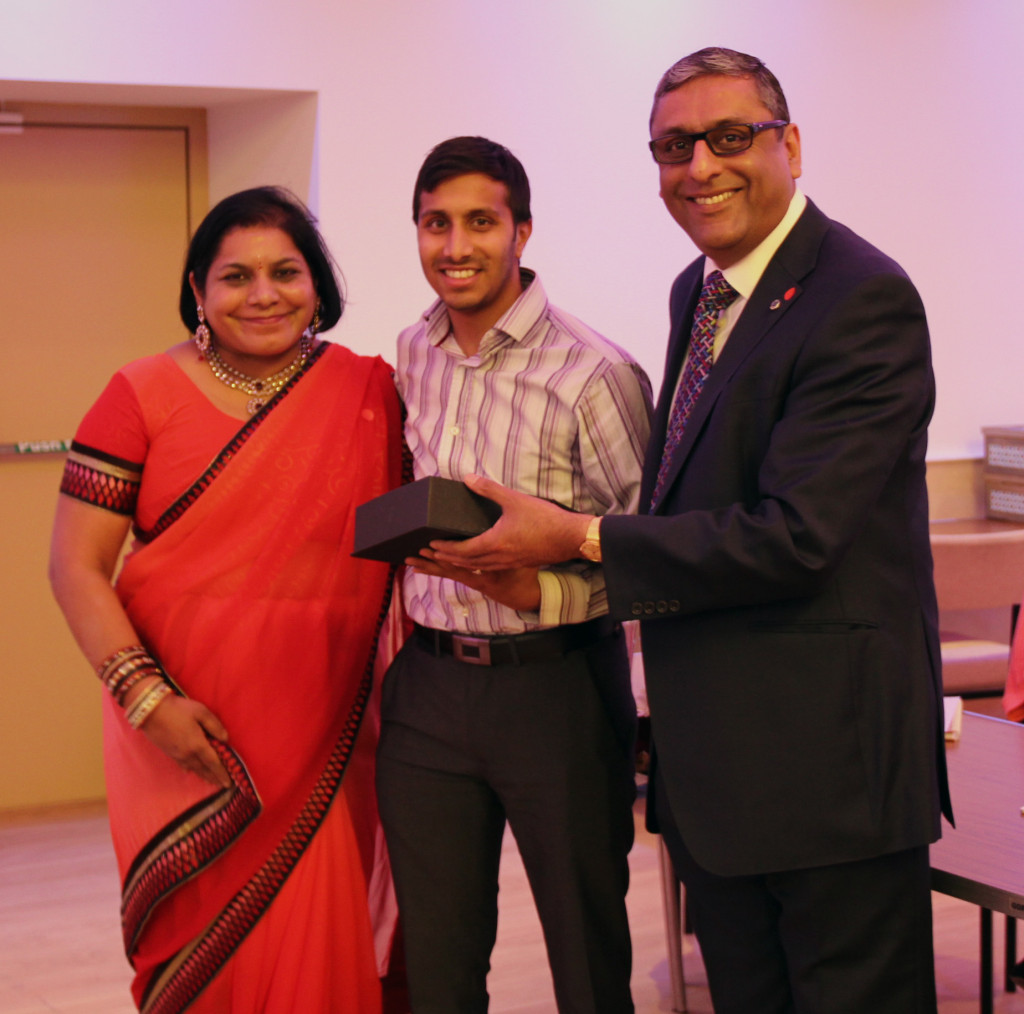 Daksha Maroo, who nominated me and is the Chairperson of Oshwal North Area, made the following speech when I was presented the award:

Mr President, EC Trustees, Board of Advisors, Ladies and Gentlemen

It gives me great pleasure to introduce Nirav Shah, a young, budding Oshwal, who at such a young age, has got involved in charitable work and become an inspiration to other youths.

I have known Nirav since he was attending the North Area Gujarati School and after finishing his Gujarati GCSE, he started to help at the school as a volunteer, attending every Saturday and helped organise the school’s annual variety shows – believe me – this is a very challenging task.

He also helped with other things and implemented many changes at the school to make it more efficient.

Nirav thought he had since the last of me when he left Gujarati school, but he was not so lucky!  He enrolled at London School of Economics and guess what!  My work place was right next to the university and we kept on bumping into each other.

After graduating at the LSE, Nirav has been involved with CAREducation Trust.   This is a charity focused on educating underprivileged children all over the world.

Nirav was the pioneer in setting up CARE Youth, a branch of the charity run by youngsters.

The CARE Youth started with 9 adventurous youths, led and inspired by Nirav, to drive auto rickshaws across India.  Nirav and his team undertook numerous fund raising and volunteering activities, including those within the Oshwal Community. (Click here to see more about the Rickshawalas)

They helped us at the Health Awareness Day, held in November 2011 and took part and volunteered at the Oshwal Pharmacists Walk in 2012.

Through the work that Nirav has led in the last couple of years, the Youth Team have raised over £80,000 which will make a big difference to the underprivileged children all over the world.

Nirav is a very modest person.  However, his hard work and dedication and support to other youths has inspired many of his peers to support and do charitable work.

It is certainly very inspirational to see such a young person work selflessly for the benefit of underprivileged.  Keep up the good work Nirav!

I feel very proud that Nirav has been recognised today by us Oshwals for his achievements and I hope this inspires the other youths to follow suit.

After all, they are the future of Oshwal. 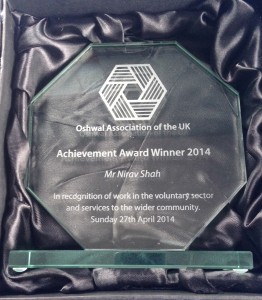 I would like to thank all those that have contributed to everything I have achieved, from my parents, friends & family, members and trustees of CAREducation Trust, members of Oshwal and so many more.

For me giving something back to those in need or the community does not feel like doing anything special. I believe it is all part of life. Anything I have done can be done by anyone, all it requires is thought, drive and most importantly action.

I strongly live my the saying “Giving is Receiving” and I encourage young and old (especially the young) to get involved in some volunteering to help others.  Every life you touch brings you more satisfaction and meaning.